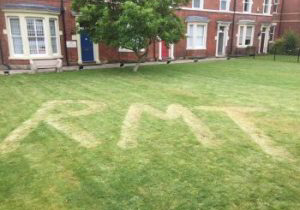 On the day that new Transport for London Commissioner Andy Byford starts work [Monday 29 June], RMT called on him to put a stop to a shameful injustice by giving London’s heroic Underground cleaners the same TfL travel pass that he and the Mayor are entitled to.

In addition to his base salary of £355,000, as a TfL employee Mr Byford, like the Mayor, is entitled to a TfL travel pass allowing free travel across the TfL network. The unsung cleaning heroes who have risked their lives to clean Underground stations and trains throughout the coronavirus epidemic do not get this benefit because they have been outsourced to a US company called ABM.

In spite of praising their ‘amazing work’, TfL and the Mayor have so far refused to extend the travel pass to the cleaners claiming that they cannot afford it. But in a report on Free Travel on the TfL Network (link in editors’ notes below), RMT can reveal that both the existing and previous Mayor had admitted there is “no and nil cost” cost to providing the pass .

“Mr Byford knows the Underground well, he must know that what TfL are doing is just plain wrong. We’re calling on him to make a fresh start and allow tube cleaners the same free travel pass that he and the Mayor are entitled to.

“This small change will cost TfL almost nothing but it will make a big difference to the low paid cleaners who put their lives on the line every day to keep the travelling public safe.”