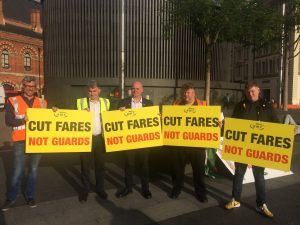 Further to my Circular No IR/252/16 dated the 24th August 2016 with regards to the above matter and where I informed you of the union’s national campaign to defend the role of the Guard and our fight against the further spread of Driver Only Operation. I can now advise you that I have received the following resolution from our Newcastle Rail & Catering Branch:

“This Branch commends all RMT members who have taken solid and determined industrial action in defence of the roles and responsibilities of the Guard. Their sacrifice has been for the safety of the travelling public and for ensuring the rail network is accessible to all especially the disabled and the vulnerable.

In the face of overwhelming opposition from a vicious Tory Government who are determined to implement the McNulty report and crush our union and propose to ban us from taking legitimate industrial action by refusing our right to withdraw our labour. They have been aided by the mainstream media who have trivialised and miss reported and out right lied over the facts of this dispute as well as the Train Operating Companies that have bullied, bribed and lied to our members. We stand head and shoulders about the entire British trade union movement in our resoluteness to fight attacks on all railway workers and must continue to do so.

However a victory for DOO at any train operating company poses a grave threat to the guard’s grade nationally. Unity with other rail unions can no longer be relied upon in the struggle against DOO the RMT must be prepared to fight this battle alone.

Therefore this branch calls on the RMT National Executive Committee to continue to fight industrially and politically against DOO. There should be no selling out our members or sweet heart deals done behind closed doors. The fight for the role and responsibilities of the guard and a safe and accessible railway for all must continue.”

The matter has been considered by the union’s National Executive Committee and their decision is as follows:

“This NEC welcomes and completely agrees with the resolution rom our Newcastle Rail & Catering Branch.

Our campaign to stop the introduction and extension of DOO is one of the most important in the history of our union.

We currently have separate industrial disputes with 5 TOCs on this issue.  These different disputes have their own dynamics, and we are dealing with them all separately.

We are, however, also following union policy decided by our 2013 AGM decision, which stated:

‘This Conference …condemns the McNulty report as an attack on all railway workers, especially on the role of the guard…. We therefore call on the General Secretary to consider coordinated strike action where McNulty threatens job losses within any train operating companies.’

‘This National Executive Committee reiterates that all industrial action in defence of the role of the guard will continue to remain coordinated where practically possible, and this National Executive Committee remains committed to consulting the wider membership on strike dates whilst adopting the same strategy of coordinating action against train-operators intent on driving through the introduction and extension of DOO’

In order to make our campaign more effective, we instruct the General Secretary to:-

We further instruct the General Secretary to arrange for the Lead Officers, and Guards Company Council Chairs and Secretaries of Merseyrail, Arriva Rail North, Greater Anglia, Southern, and South Western Railway to meet with himself, the Senior Assistant General Secretary,  and the NEC as soon as practicable.

We note that a new Train Crew newsletter is being produced, which will of course be about the campaign against DOO. We instruct the General Secretary to distribute this to Regional Councils, branches, and to all traincrew members.

All Regional Councils and branches to be advised. All traincrew members to be informed by email.”

Our position has always been that the Guard should be in full operational control of the doors and has a vital safety role for passengers and the railway in general. The union continues to gain public support through intense leafleting, holding successful public meetings and educating the general public and politicians about the safety role of the Guard and the importance of retaining these staff on passenger rail services.