How the Union Works 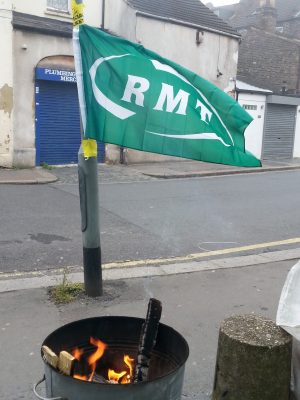 The RMT is a member led union (RMT Rule 1). You can directly influence our policies, actions and who our officers are.

Branches (RMT Rule 10): The main role of a branch is to organise workers in its sphere and will discuss and vote on many different issues. If the issue is an industrial matter, then it can be sent directly to the National Executive. If it is other matters then it is sent to the Regional Council.

Regional Councils (RMT Rule 11): Any member can attend, but usually a branch will nominate a delegate (with their voting rights). A Regional Council’s primary role is recruitment and
organisation of members in their sphere and campaigning in support of union objectives. They may have reports from their regional organisers and NEC Member and will debate items that have been sent to them by Branches. Successful items are sent to the National Executive.

National Executive (NEC) (RMT Rule 4): Is the ruling body of your union. It oversees the general administration and is the government of the RMT in between annual or special general
meetings. They have complete policy and decision making powers and may interpret the RMT Rule Book or issues where it is silent. There are 16 (12 General Grades and 4 Shipping) of them and they are elected by the members in their Region to act for us.

President (RMT Rule 5): The President oversees meetings of the National Executive, they are, in effect, the chairperson of the meeting. They are the custodian of the Rule Book and the
heartbeat of the RMT. They have the right to speak but not vote. There is only one and is elected by all members in the RMT.

General Secretary (GS) (RMT Rule 6): The GS obeys the instructions of the National Executive and is responsible for the general correspondence of the RMT, signs the documents and is your face. They can address but not vote at NEC Meetings. They oversee the work of Regional Organisers and the AGS’s/ National Secretary. They are elected by all members.

Asst General Secretary (AGS) (RMT Rule 7): Work under the direction of the General Secretary. There are two of them, with the one that has been in position longest becoming the
Senior AGS. That person undertakes the role of the GS in their absence. They are elected by all general grades members

HOW THE RMT UNION WORKS